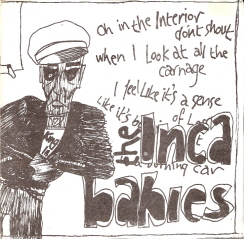 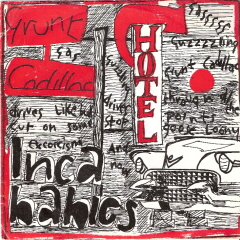 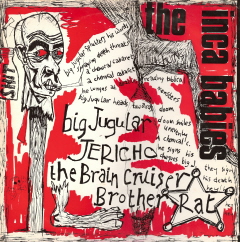 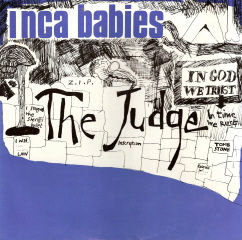 Inca Babies formed in 1982 and were from Hulme, Manchester. They were influenced by The Birthday Party, The Cramps and Link Wray. You can hear the influence of The Birthday Party very well on their earliest releases.
The band did 4 sessions for John Peel.
Here are the first 4 releases of the Inca Babies. The 7"s sound quite raw as these are 8-track recordings. For the 12"s, the band got into a real studio this time.
Inca Babies released 4 albums and another 2 12"s. I can post all these in time if people are interested.
There is an anthology CD released just recently on Anagram that has some tracks from the Peel Sessions.

Great post...you rock and so do the Inca Babies..and I would surely be interested to hear some more of them

thanks for the great post. I really love your choices.

Got some Sune Studds & Gronlandsrockarna stuff 2 x 7" inch. As well as some Sotlimpa tracks off a compilation, sorry could not get that LP now but will probably get it later on.

Not sure if this is exactly the 7"s you had on your wishlist but if you already have it then no bother!

Also just uploaded some cool crust hardcore stuff like G-Anx, I Thrash therefore I am Comp, Terveet Kadet etc. But i assume you already have all that...Lol.

Again, thanks for all the cool stuff you post - so cooool!

Or actually heres the tiny url:

Thank you all for the appreciation.
Slobodan,
thanx for the link. I'll check it out immediately.Very much appreciated.

Ok, no it did not work for me either. It's saying the file names are incorrect or too long...had this problem last week with some stuff I downloaded from another blog.

If you can wait I'll just re-do it and re-upload tomorrow or so.

Really great to find the Incas again. I had all this stuff many moons ago and lost it during various house moves :(

A nice blog bringing back some memories for me.

Do you by any chance have anything by the Luddites? I'm really kean to find their 'Strength of your Cry' ep. Here's hoping.

Hello Hex,
I'll bring back some more memories :)
I don't have the Luddites 7" but I will be on the look out as I also want to hear this one. I have one track of them on a 4 band comp. 12". I think it's the only track not released anywhere else. Other bands are Red Guitars, Party Day and Red Lorry Yellow Lorry.

Hi, just arrived via Nachete's recommendation over at CZ. On the lookout for the Inca's 3rd LP, "Opium Den" [their best, imho] and was hoping to find it here. Regardless, i was greeted with a fabulous assortment of records-i-bought back then and more than a few to try based on our similar tastes. If "Opium Den" is available [perhaps i overlooked it in the site map?], please point me to it. But regardless, just wanted to say, hi-nice-to-meetcha, and i plan on taking the PH journey starting with your first post, reading forward. A lost art in this new age of smash-and-grab, and i think i owe it to all your hard work to read and enjoy the artwork and comments regardless of my wants. When someone keeps the links active going back so far, there's no rush: i'd rather read and learn. That's the fun [perhaps lost nowadays] of the best music blogs. Without really poring over the posts, i would NOT know about "Sturm Und Drang" [for example], but they won't be unknown to me by tomorrow. Happy you are here, CG.

Hello Apollojams, thanks for the appreciation and have a nice trip on PH. You'll probably find some dead links. You can always let me know.
As for 'Opium Den', my fellow blogger Highlander posted this album here:
http://cactusmouthinformer.blogspot.com/2007/03/inca-babies-opium-den-lp.html

Would be great to see these reripped in full 320 glory :-) i bought their first album way back then

Hey, just wanted to check back with you with another thanx, as i followed up on the cactusmouth connection for "Opium Den", and lo-and-behold, better rips for "the first 4"! Big Jugular, baby! I'm off to update the old 192 rips.

Really great! Thanks a lot!

No really, it's really nice from you giving these bands the hifi-threat.

I actually bought the first album way back then. Just didn't have the money to buy all the good stuff that was played by Peel those days...