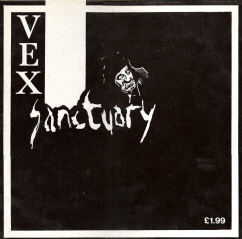 Vex hailed from London and the 'Sanctuary' 12" is their one and only release. It was issued on Fight Back, a sublabel of Mortarhate, run by the people of Conflict. Vex played gigs with Conflict, so they were more associated with the anarchist punk scene than the Batcave fair. But contrary to most anarchopunk bands from that time, they were not influenced by CRASS or Conflict. Soundwise, the band was more inspired by Killing Joke or UK Decay.
Another song called 'Rushing To Hide' can be heard on the 'We Don't Want Your Fucking Law' comp. LP, also on Fight Back.
'It's No Crime' also appeared on the 'Who What Why When Where' comp. LP on Mortarhate (and reissued on Get Back Records).
A great overlooked record, so check it out.

THANK YOU! Was looking for this a couple of months ago but then forgot about it...time to revise that memory!

Drinking a bottle of vodka from time to time won't help to revise your memory I'm afraid! :D

curious guy u run this web sit yeah? its mrmagoomc4 again just listening to vex fucking ace got this one live tape at electric ballroom 84 which rocks ive got about 6,000 boootlegs in my home town of plymouth which i plan to get up to fife in scotland one day of which im sure ive stuiff ude like to have got 3 screaming dead demos,mobs last ever gig md quality

Thank you so much for this!...I love Conflict..so this one definitely deserves a listen...

thank you very much!


need to find all the stuff again and this was one of the lost files.

amazing!
can you advice me some bands like this?

I like "World In Action" and "It's No Crime" best. Very good songs, unusual, raw and energetic. Honest music. Thank you!