Something Stirs (The Dead Mourn The Living) 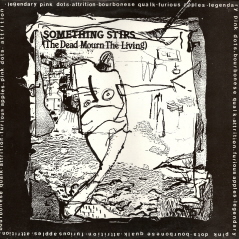 Well, here's an excellent compilation of experimental artists from the UK. There are some well known names on it. It was released on Adventures In Reality Recordings, a label run by the people of Attrition. This label was originally a fanzine/cassette label. I think that the first audio release was the 'Devoid' flexi of Attrition.Other bands who released tapes were Irsol, Stress and Velvet Monkeys. The 'Something Stirs' comp. LP was the first vinyl release.
Attrition is featured here with 3 tracks in the vein of their 'Reason Of Attrition' LP.
The Furious Apples are the least known band on here. They were from Coventry and I just found out that they released the 'Engineering/Belladonna' 7" on a small local label called Sonar Records.
Bourbonese Qualk offers 3 tracks similar to their debut 'Laughing Afternoon' LP.
The Legendary Pink Dots bring us a long track in the vein of their early albums.
Attrition and The Legendary Pink Dots are still around today.
Check these sites for the bands:
Attrition
The Legendary Pink Dots
Bourbonese Qualk
The Bourbonese Qualk site is very interesting as you can download all of their albums which I recommend to do so. You won't be disappointed.

note: the Bourbonese Qualk tracks could not be seperated so I ripped them as 1 track.

Thanks. I am sure this will be good stuff!

Hey Slobodan, if you like this one, check the 'The Thing On The Doorstep' blog of my friend Cranio. He posted the 'The Elephant Table Album', an essential comp. of UK experimental acts from the 80's.

Thanks for the tip. Very happy that I saw the Abwärts post. Nice! :)

I have been looking for a nice copy of this comp for nearly twenty years. I've owned a ragged cassette copy since 1989. Thanks a million and one for this!

I bought this back in 1984. Great to listen to it again! I still like especially the Attrition tracks. Thank you for sharing!

Re-issue of Something Stirs planned for late 2012/13 on CD and download. Other Adventures in Reality stuff coming out too. E-mail me for details alanrider1@aol.com

Hi Alan,
please let me know when the reissues are ready and I'll post about those here as promo. Looking forward to the Stress and Irsol tapes reissues.

Stress tracks from the first two cassette albums will be coming out on vinyl on Dark Entries in mid 2012. A special issue of Adventures in Reality fanzine will be included with that one. Re-issue of the Stress LP 'The Big Wheel' is coming out on CD/Download on Russian label Other Voices in 2012. All being well, re-issue of The Last Supper is to follow on Adventures in Reality. Irsol will come after that.