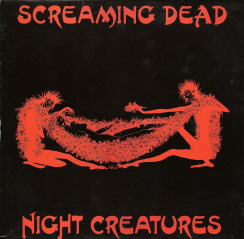 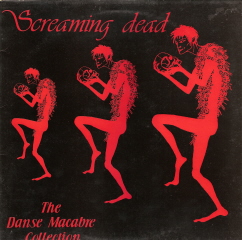 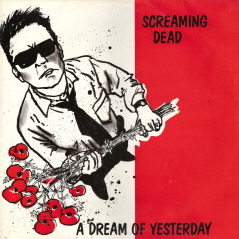 Screaming Dead were formed in 1980 and were a punk band with a strong interest in the dark and morbid. They described themselves as a horror punk band. Guitarplayer Tony Mc Kormak played an important role in the sound and image of the Screaming Dead.
The band released 5 records during their existence of which you'll find the 3 12"s here. The other 2 records are the 'Valley Of The Dead' 7" and the 'Paint It Black' 7" (which I don't own for the moment).
There has been a discography CD released in 1993 called 'Bring Out Yer Dead' but it is hard to find nowadays.
The band reformed in 1997 to do some reunion gigs and recorded the 'Death Rides Out' CD that contains re-recorded old songs and some new ones. The band split up again in 1999.
Tony Mc Cormak plays in pagan goth rock band Inkubus Sukkubus nowadays, that was formed after the demise of Screaming Dead in 1986.
This one goes out to Erik SN at Missionary Penetration.

Great stuff and a fantastic blog you have here.

Screaming Dead also released an official cassette on Recreational Tapes (Skill 1) called "Children Of The Boneyard Stones" which featured "This Is The End of the World", "Nuclear Apocalypse", "Damned Generation", She Was done In By a Nutter", "God of love", and "Do You Wanna Cremation".

Hey English Paul,
yes I've read about that tape. There is also a tape called 'Western Front' on Catch 22. Never heard these but would really want to.
Thanks for your appreciation.

Hey Curious Guy, I can burn you a copy of the Screaming Dead cassette if you like. My email is dead_brit@yahoo.com if you want to discuss.
Are you going to post anything by the INCA BABIES ?

I already ripped some Inca Babies so expect them to be posted here in the future.
Will email you.

Once more, good good stuff!! Thanks.

ps. Listening to the other stuff like mad this weekend - Vex, Ritual, No Trend etc. Very good and I can't comprehend how these bands could have slipped through the net for so long. Lol... ds

Blast from da past! I have the 'Valley of the dead'7 " bw/schoolgirl junkie & lilith, on Skull records. I think I saw a gig once as well, probably '82 or early '83 at the latest.

...next to them in the crate was a single by 'Darkness & Jive' - Guys and dolls, on Red Rhino.Another oldie.

Very much thanks for this - 'Western Front' had good songs but shit production. "Children Of The Boneyard Stones" was as good as the vinyl stuff. I have vinyl of 'Paint it Black' and 'Valley of the Dead' but no turntable. A compilation called 'Bring out yer Dead' of everything they ever recorded exists but seems really hard to get hold of now.

Many thanks for the wonderful MP3s you give away! I love you!

You can find The Screaming Dead CD at Resurrection records in Camden, London or by mail order from them:
http://www.resurrectionmusic.com/
The CD is also available from M&A Musicart http://www.ma-musicart.se/
Tony's current band Inkubus Sukkubus is also worth checking out - Great stuff with fantastic female vocals by Tony's wife Candia.

its mrmagoo again i got demos of these down in pasty land too not sure wot ones though fukn aCE SITE DIS U GOT ANYTHING BY CULT MANIAX,THE FITS,i cud get me mits on ur keepin me up late gotta be up at 10am haha

dm 999, bookmarked! Great pictures you have. Will check it out from time to time.

thanks sooo much for the link! have you by any chance got hold of the paint it black cd? x x

Thank you, the compilation seems to be somewhat hard to find these days so the EP's are nice to have.