Marc Riley With The Creepers 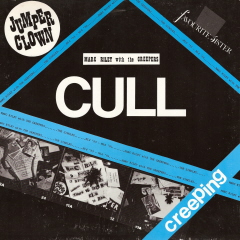 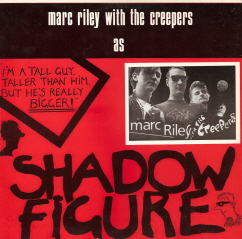 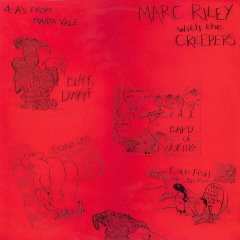 Marc Riley was a member of The Fall from 1978 till 1982, first as roadie later as bassplayer but moved to guitar and keyboards. He was sacked from The Fall after a tour in New Zealand. But this didn't stop him to make his own music.
The 'Cull' LP is a compilation of the first 3 releases. On the 'Favourite Sister' 7", he got help from Steve Hanley, Paul Hanley and Craig Scanlon who were members of The Fall back then. On the second 7" 'Jumper Clown', the Creepers were already forming but the drum parts were done by Billy the drum machine (you can hear Marc shouting to 'Billy' in the beginning of 'Violins'). The other 4 tracks were originally released as the 'Creeping At Maida Vale' 12" and was the first session recorded for John Peel in 1983.
The 'Shadow Figure' 12" was the second John Peel session recorded in 1984. The '4 A's From Maida Vale' 12" was the third session recorded in 1985.
For more on Marc Riley, check this site here. Has a complete discography, press reviews and lyrics to all the songs.

thank you so much. i love marc riley & the creepers. his voice is like broken glass to me. i like the fall too, very much, but marc is not so arty. more of him, that is my request. and more requests: big flame, jon wayne & sexton ming.
thanx again. a friend in mind & music

thank you. the other stuff from marc riley & the creepers i knew. but this first lp is special for me.

thanks for this, i have/had the 1st 2 singles and then "lost track of the band"!

Excellent stuff! I still have all of these in their various vinyl permutations but haven't seen 'em in ages (they're stowed away at my parents' somewhere) - can't wait to hear 'em again! x

New link Tony. Actually the link still worked but I replaced it with a new one. Let me know if it worked out well.

spasibo! thats seems like mark lost in "the slates" with patрological keyboards)

Unfortunately, I don't think the link for Shadow Figure/4A's works any more. Any chance of rebuilding it? I really appreciate your posts of the Marc Riley stuff, I've always thought he was hugely underrated. Would love to see more of him here, in fact. He brought me to this blog, and you've done great work making so much of this stuff available again.

Hi P., seems to be a problem with mediafire. I'll wait a bit and see what happens otherwise I'll re-up, no problem. You can find the Gross Out and Fancy Meeting God albums on my blog as well. Enjoy!

any chance to re up again the shadow figure 4 A's? thanks!

shadow figure 4 A's is dead again. Thanks for your effort!