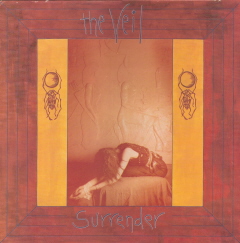 The Veil is another not so well known goth band from the UK. 'Surrender' is their one and only album they released. As with many female fronted goth bands, the band got easily dismissed as another Siouxsie & The Banshees clone. No wild guitars or tribal drumming here; the music is quite relaxed on this album.
The Veil rose from the ashes of Beast, a cult band that had Bryan Gregory(The Cramps) in it's ranks. Beast released 3 singles of which one is 'Love In A Dying World', a song that also appears on this album. I never heard Beast before so I can't compare both tracks.
The Veil released one 7", 'Twist/Sway' (both tracks appear on the LP) and two 12"s: 'Manikin' and 'Heavy Heart'. I will post these later.

This is fantastic stuff !. You are opening a whole treasure trove of records on this site. THANK YOU !!!!

Hey Monokrom, thanks for the appreciation.
I can only help you with the Blood & Roses. I think SexBeat only did a 12" as far as I know. Only heard them on the Batcave comp. I will look for those others as some of them I never heard of.

Fur Bible were Patrica Morrison & Kid Congo doing some dark stuff. They release a 12" and supported Siouxsie on the Cities in Dust tour.
Dawn after Dark - metal in the vein of Cult & Balaam & the Angel.
Gloria Mundi - Gothic pioneers from late 70's relaesed 2 LPs I think.
SexBeat- 12" + Batcave
Gods Toys - Coventry band who toured with Adam & the Ants in 80 or 81, 2 singles as far as I know.

Keep up the good work!

Made a small but important correction. It wasn't Kid 'Congo' Powers but Bryan Gregory of The Cramps who played in Beast.

Hey Fritz,
thanks for enlightening me on that 1st 7" of Beast. Probably very rare.
I will post the 12"s of The Veil sometime soon.
Come back anytime!

The new link don't function..
Can you do something?

Thanks a lot!
bye

Hello Friends,
The Link Is Dead ...Mediafire not found.
Please Re-up the Album
Thanks, and congratulation from blog..is good
Jose

Hello jose, I tried and it worked fine. Maybe try again? If it doesn't work I'll re-up on divshare, OK?

Just stumbled across this page looking for Medicine Factory... they were a great band, very much in the Play Dead mould; released two 12" in the late 80's / early 90's.

First was a cover of 'Sympathy for the Devil' (can't remember the b-sides), second was the stupendously brilliant 'Breath'. I saw them a few times supporting RLYL; I know they supported Claytown Troupe as well. Anyone got any more info on them?

Thanks for The Veil LP.
It will help me keep my original in pristine condition. I won't play it anymore on turntable and will listen to the digitalized version instead.
:-D

Have you uploaded those Veil singles yet?

Yes. You can find both 12"s here:
http://phoenixhairpins.blogspot.com/2006/12/veil-manikin-heavy-heart.html

The Veil moved to Los Angeles and put out one 12", I think and were never heard from again
I got this in a letter from Andwella
James Christ was another member

andy chance of this on CD!? I already have the LP, but would rather have a full sounding remastered CD

A reissue on CD would be a good idea. Now we have to deal with the original vinyl or MP3's.

Hello there, Marcus de Mowbray here, once drummer of The Veil. Andrella and James Christopher moved home to LA and got married. Myself and Andy Dakeyne (Guitar) chose to stay in London and are still both active musicians and I invent and make musical instruments and props for TV and museums

Hello Marcus, thanks for leaving a comment here. Still a lot of people into The Veil. Wish you all the best with what you're doing these days.

I'd nver listened music of this band until my sister bought me thier album. I have to say that they really overcame my expectations, specially with "The rain" track·

Some more info about the band Medicine Factory:
They changed their name to 'Stark' and released an album called 'Everything & Nothing' in 1991.
Their singer Jim Love moved to Australia, and has a MySpace site here:
www.myspace.com/mrjimmylove

The Stark / Medicine Factory album can be downloaded here, along with some rare press cuttings about the band:
http://rapidshare.com/files/412770487/Stark__AKA_Medicine_Factory_.rar.html

Amazing!!! At long last, a shedload of vintage Medicine Factory tracks have appeared on YouTube:

Sympathy For The Devil -
http://www.youtube.com/watch?v=FHhUpzhgd2g

New link for Surrender of The Veil.

Both The Veil posts have new links.