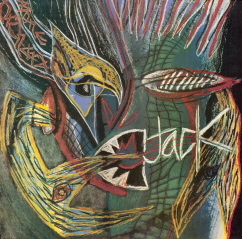 Bone Orchard were one of those bands from the UK who where strongly influenced by The Birthday Party. But instead of copying, they created a sound of their own. While the first records still have The Birthday Party sound, their 'Jack' LP shows more variety by adding other instruments like piano, cello, violin and saxophone. And as always, Chrissy Mc Gee, the female vocalist, groans and growls in her own distinctive way.
There's a deathrock page on Bone Orchard here.
I will post some more Bone Orchard records in the future.

Another amazing entry of incredible musical worth. Her voice will hypnotize you like a darker Siouxsie. This music can get intricate and involved, very compelling on all accounts - a must listen!

Keep an eye out for more, folks, this is the stuff..

one of the best bands around at that time and still!
I was looking for the lyrics of that album if possible in particular Scarlett Ropes.
can anybody help?

Great great stuff! I knew 'jack 7"' and 'swallowing havok ep' before, but the whole album is excellent - thx a lot for sharing.

Hey I just found your blog and I have to stop right here and tell you 'What an amazing selection!',Siglo XX, Inca Babies and Bone Orchard!Nice back in time trip, thanks!Totally thrilled from Puerto Rico.

I'd totally forgotten about Bone Orchard despite the fact I actually most of the vinyl you've posted! Age-addled memory ahoy! Rest assured I'll be downloading this lot sharpish - ta VERY MUCH for up-ing 'em... IBx

YOU HAVE MADE MY DAY !!!!
I still cant believe Bone orchard have never released anything on CD, except for a few songs on various compilations.
They are simply Brilliant and so deserve to be remembered...

Beyond the Wall of Sleep said...